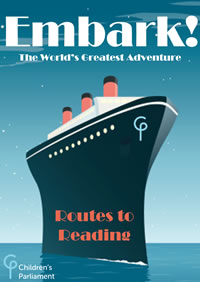 Reading is the key to unlocking a child’s full potential, yet there are many children in Scotland who leave primary school without being able to read well. Children’s Parliament is supporting Save the Children in their mission to ensure that by 2025, every child is a confident reader by age 11. As part of the Read On Get On campaign, Save the Children commissioned Children’s Parliament to facilitate a consultation with primary aged children about their experiences of and views on reading.

During the Embark! project, Children’s Parliament worked with 100 children from P1 to P7 from three primary schools across the country – Inverclyde, South Lanarkshire and Edinburgh. These children participated in a series of creative workshops that sought to gather key messages about the joy, importance and challenges of reading. The workshops culminated with the creation the Embark! bookcase, an exhibition that was launched alongside the Read On Get On campaign during Scottish Book Week in November 2014. The exhibition toured libraries across Inverclyde and South Lanarkshire throughout summer 2015.

Embark! Routes to Reading was part of the Save the Children Read on Get on campaign